PREISCRIZIONI PER I MONDIALI DI SOPOT 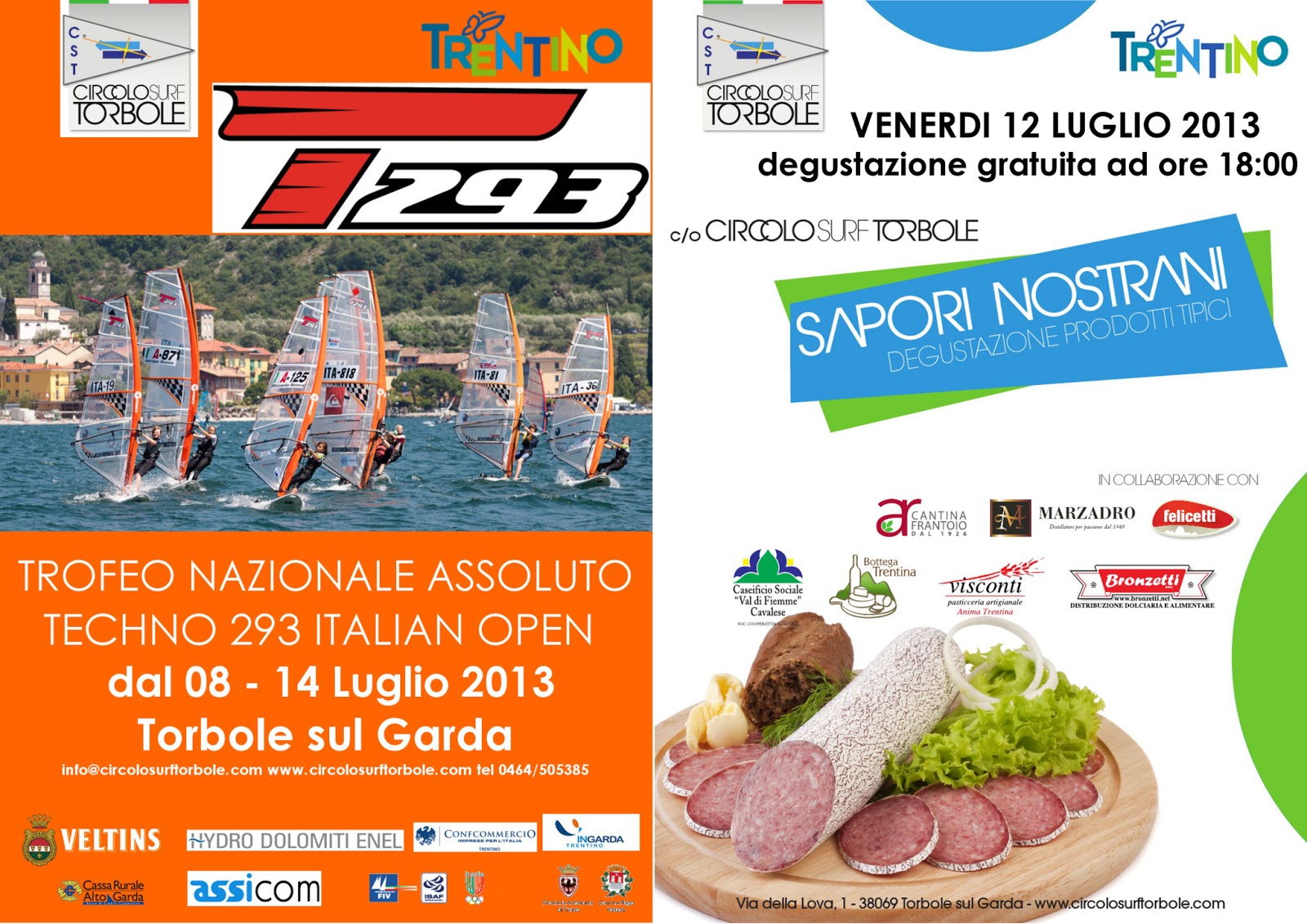 3 - RULES:
The event will be governed by the rules as defined :
In the Racing Rules of Sailing ISAF 2013/2016; in Appendix B Sailing Rules (Windsurfing Competition Rules); in NOR and SIS;  in Techno 293 Class Rules; Possible official notices of Race Committee.
As for Rule 90.2 c oral instructions may be given ashore and afloat.
Boards may be required to display advertising chosen and supplied by the organizing authority.
ISAF Regulation 20 ‘Advertising Code’ shall apply.
As for Rule 20.4 no personal advertising can be displayed.
.
4 – CLASSES AND DIVISIONS:
Boards BIC Mod. Techno 293 One Design can race only. Open event: no limits to the number of  Italian and foreign competitors.
Considering age range, the following  male and female divisions are entitled to race:
a)  Plus (born in 1996 and older);
b)  Junior Under 17 (born from 1997 to 1999);
c) Minim Under 15 (born from 1999 to 2001);
d) Under 13 (born in 2001);
e)  First-Step (esordienti):  born in the years  1997-1998-1999-2000-2001 in their first year of racing in T293.
Due to Italian rules, all competitors born in 2001 may race in Under 15 Division if they have celebrated their 12th birthday within the date in which the competition starts only. On the contrary they have to compete in Under 13 or Esordienti (First Step) divisions.
All divisions are valid if at least three competitors race in the relevant division.
Techno Slalom Cup is valid when at least one race is completed.

5 - ELIGIBILITY:
For all foreign competitors:
5.1 All entries shall meet the requirements of ISAF Regulation 19-Eligibility Code.
5.2 Competitors shall be members of a National Class Association which is a paid up member of the relevant international class association.
The following shall be presented upon registration:
- Original Entry Form - pre-entries will be given their completed form to check and sign at registration.
- Evidence of valid third party insurance
- Proof of age
- Parental/legal Guardian Assent - for those under age of 18
- Medical Treatment Permission - for those under age of 18 or on their parents medical insurance policy
Each participating board shall be insured with valid third party liability insurance with a minimum cover of €1,000,000 per event or the equivalent.

6 – WIND SPEEDS AND COURSES:
If the wind speed is less than 6 knots in the starting area at any time during the starting procedure, the start shall be adandoned. The start of the course will be in front of the sailing club, compulsory gate looking on Capo Reamol and finish to the sailing club.
Race commitee shall made the decision of suitable conditions to continue, to reduce or to stop the race only.

7 - BUOYANCY:
All competitors must wear a personal buoyancy.

8 - SCHEDULE:
All competitors have to attend on Sunday July 14th the Skippers’ meeting scheduled in the morning at time that will be posted on the Official Notice Board within 8 o’clock p.m. in the previous day. During skippers’ meeting daily program will be shown. No warning signal shall be made after 4 o’clock p.m. One long distance race will be sailed only.

9 – SCORING:
Scoring will be in accordance with RRS Appendix A and using rule A 4 “Low Points Scoring System”.

10 – SAILING INSTRUCTIONS:
The Sailing Instructions (SI’s) will be available at the Registration Office upon registration time.

11 – ENTRIES AND ENTRY FEES:
All competitors that have already sailed Techno Slalom Cup and/or T293 Italian National Trophy will be admitted free of charge. New competitors entry fee is € 15.00.
All registrations have to be confirmed, in the Regatta Office at Circolo Surf Torbole,  from 9 o’clock to 11 o’clock a.m. on Sunday July 14,2013.
Entry forms must be signed, for underaged competitors, by parents or by coaches.
For coaches and support personnel, if they have not already paid for Techno Slalom Cup and/or Italian National Trophy, have to fill a specific entry form available at Registration Office and pay a Coach entry fee of € 15.00. They will receive a white flag with a coloured “S” that must be displayed on the support boat.

13 -  MEDIA AND RIGHT TO USE NAME AND LIKENESS:
In registering for the event, competitors automatically grant to the Organising Authority the right in perpetuity to make, use and show from time to time at their discretion, any motion pictures, still pictures and live, taped or filmed television and other reproduction of them, taken during the period of the event, for the said Event as defined in the Notice of Race and Sailing Instructions in which
he/she participates, without compensation.
Media boats can sail under licence from the Race Commitee only.

14 - DISCLAMER OF LIABILITY:
Competitors participate in the event entirely at their own risk. The organizing authority, the Race Committee or any of their officials will not accept any liability for material damage or personal injury or death sustained in conjunction with or prior to, during or after the event.